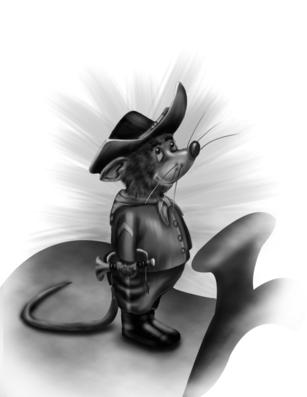 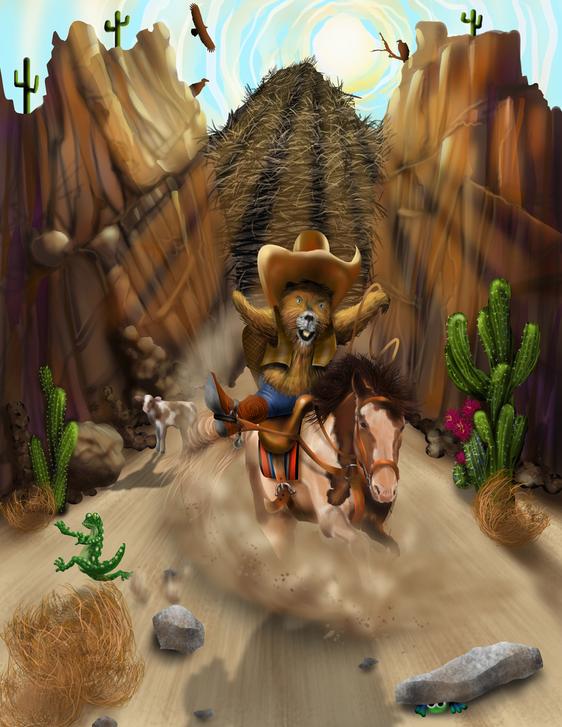 A furry frequent flyer on the PALSOMINE blimp, Benny the Beaver, gets tele-ported to Storyland’s surface, and becomes what he had always dreamed of  being – a cowboy. After three hours of Storyland time (but just a minute on the blimp), his five friends aboard PALSOMINE get ready to join him in his fight against rustlers.​

Benny the Beaver in the Wild West

Wearing a ten-gallon hat, chaps and his cowboy boots, Benny the Beaver stood by the lake watering his horse when a giant eagle, flying low, SWOOPED over his head.
Casting its shadow over the water the eagle flapped its wings to a midair pause in front of Benny, snagged a fish with a dip of its claws, hardly making a splash, and flew to its nest.
Near the top of a tree the eagle CAWED at its baby as she floated above it.
Then a little eagle left their nest to follow its mother out over the lake—where she dropped the fish—and the baby SWOOPED like its parent to snag the trout out of the air before it touched the water.

“Whoa—”said Benny, “so that’s how eagles learn to fish,” as he watched the birds flying back to their nest with the wriggling trout in the baby’s beak.

But below the nest Benny saw wisps of something that shouldn’t be near any tree.

“Smoke,” said Benny, “something is burning under their nest.”
So Benny jumped on his horse and galloped by the shore until he reached the tree and the source of the smoke… a smoldering fire.
“A campfire—that hasn’t been put out,” he said to Becker as he jumped off his horse.
‘Cowboys are more careful than that,’ he thought as he dipped his hat in the lake to tote some water back to the fire.
“I wonder why they left—and in such a hurry?”
Then as he poured the water Benny saw on the ground were scattered pans and a kettle, and cow hoof marks and horse hoof marks, all of them headed in one direction.

‘Rustlers,’ Benny thought, 'who must have gotten spooked by something they saw—real cowboys wouldn’t have left a mess like this, or a burning fire.'
But as he poured the last drops from his ten-gallon hat onto the coals Benny heard a sound, a barely audible moan.
“MOOOO” came the moaning sound again from the bottom of a ravine at the edge of the campsite.
Hurrying to see what it was Benny found a baby calf down a short, steep slope, who couldn’t climb out.

“Don’t worry—I’ll bring you a rope,” Benny said as he ran to Becker, tied one end of his rope to the saddle’s horn, then hurried back to the calf.

Pulling the rope taut Benny then lowered himself down to where the calf was standing—and was a little bit scared.
“What’s your name?” Benny asked the calf though it was just a baby and couldn’t answer his question.
But a silver tag hanging around its neck read…
“Francis—you must be Francis,” Benny said as he read the name on the tag. Come on, Francis, let’s get you out of here.”
Tying the rope gently around Francis’s shoulders Benny then yelled, “Pull, Becker!” and his powerful horse stepped slowly backward until he yanked Benny and his friend out of the ravine.

Untying the rope Benny asked Francis where his family was, or if he had friends with him. But the baby calf could only stare back at Benny with his dark brown eyes.
“Don’t you worry, we’ll go find them. Can you trot? We’ll go to the top of that hill over there, so we can see where they went.”
“Follow us,” said Benny as he jumped to his saddle—and even though the calf didn’t understand what Benny had said, when Becker trotted away Francis trotted in step just behind him.

Up a long, gradual slope the three of them went until they reached the top of a long flat hill, that looked like a frying pan put bottom side up.
“There!” said Benny as he pointed to a cloud of dust that was churning steadily along a valley floor.
“That must be where your family is,” he added—then not so loud that Francis could hear, “and the rustlers.”
“Come on, Francis, let’s follow this arroyo as long as we can.”

In the cloud of dust on the valley’s floor the rustlers moving their stolen herd saw their goal ahead—the mouth of the valley. Once past it they could run away in any direction and never get caught.
“We’re almost there boys!” said the rustler boss as he looked through a pair of stolen binoculars.
“We’re home free after we leave this valley!”

Near the end of the arroyo Benny could see where the rustlers were headed and knew that, somehow, he had to get there first—and he had to stop them.
Then he remembered, as he turned to Francis, where he was and the power of a word, the most powerful word in Webster’s World.
“Yes—” he remembered. “Yes to our being at the start of the valley!”
And POOF like that, on top of Becker, he was waiting with Francis at the valley’s entrance.
“Now—how do we stop them?” Benny wondered out loud as he saw how big the valley’s opening was.
But turning to Francis again, he had an idea.

“What is that?” said one of the rustlers as he looked at something tall and wide like a pyramid in the valley’s opening.
“What is what?” said the rustler boss as he pulled at a tumbleweed caught in his beard—that was sticking to it like cotton candy.
“That mountain ahead of us wasn’t there before—and it’s plugging the valley.”
“Must be a mirage, wasn’t no mountain there a minute ago. Have a look with my binoculars while I get this tumbleweed out of my face.”
“Can you see what it is?”
“Yeah, but I can’t hardly believe it.”
“Well what is it?”
“It’s a…

“… beaver dam—five stories high—and there’s a beaver on a horse standing in front of it, next to that calf we lost.”
“Can’t be a beaver dam there, ain’t no water in this arroyo—and besides, take a thousand beavers build a dam that high. What’s the beaver doing?”
“Looking this way…no, wait… he’s riding.”
“Away?”
“No—at us! Come on, let’s get him!”

​​
“Okay you bullies, your rustling days are OVER!” Benny said as he rode atop Becker at a mighty gallop—right at the gang.
“He ain’t turning away is he?” hollered the boss rustler as he spurred his horse to go even faster with the tumbleweed still caught in his beard.
“No! I think he’s riding even faster at us! And now he’s standing in his saddle! And swinging his tail! But what’s that cloud coming down the hill over there?”
“What cloud where?”
“That cloud of dust!”
“Must be wild horses!”

Then the dust in the cloud with the bugle in it began to settle as the riders inside it pulled to a stop.
“Benny!” yelled Albert the Field Mouse holding the bugle and dressed like a cavalryman on top of his horse.
“Albert!” Benny replied as he looked at the field mouse with the rest of his friends on top of their horses—Ray the Rabbit and Emily the Squirrel, with Jami and Sammy.
“Are we glad to see you!” added Ray sitting on top of her big brown bay.
“We cut things a little close, didn’t we?” said Emily who looked like a particle on top of her charger, and had her umbrella tied to its saddle.
“Maybe a little bit,” said Benny, “but I’m really glad you’re here.”
“Who is your friend?” asked Jami still wearing her dress as Francis approached them and trotted to a stop.

“This is Francis, who got separated from the herd when he fell in a ravine.”
“That must be his mother,” Sammy said as he watched Francis now eagerly trotting back to the herd and to a cow at its edge— who kept her eyes locked on her approaching baby.
“Must be,” said Benny as he watched the calf and its mother coming together and tenderly licking each other.
“You look like real cavalry,” Benny said as he stared at his friends—even though Albert and Ray were the only ones wearing a uniform.
“Always wanted to have a uniform and a hat like this,” said Albert, “and toot the cavalry  charge.

"You tooted a great charge,” said Benny. “When those rustlers heard it their ears grew twice their size, and they couldn’t skedaddle out of here fast enough. But where’s Captain Papul?
“He’s up there—” answered Jami, “someone had to stay and steer the blimp.”
And when Benny looked up he could see the Storyland Blimp floating high in the clouds, looking like a particle in Mesmer’s Sky.

“Think we should go back to it now?” asked Sammy.

“Yes — I think we should,” answered Benny.
“I can’t wait to see what happens next, and what new words and things we’ll learn in Storyland.”
And at the very same time, with perfect synchronicity, the six friends said:
“Yes to our being back on the blimp!”